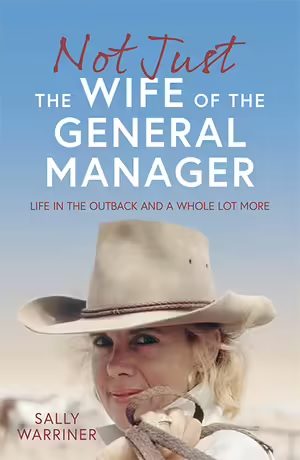 Not Just the Wife of the General Manager

Not Just the Wife of the General Manager is a rollicking memoir of one woman’s life on outback cattle stations, and an homage to the many unsung women like her.

It was the 1980s and Sally was in her early 20s when she returned from a backpacking sojourn and hitchhiked to Australia’s far north. But instead of moving back to Canberra as planned, she stayed. After marrying a cattle station manager, Sally lived and worked with him on various stations until she was 50, ingraining herself into the lives of the characters who inhabited these isolated places.

With wit and sass, Sally tells the story of how she was so much more than just a wife of a station manager (despite what some of the top end blokes thought). Among other things, she was a nurse (dealing with local accidents, assisting the Flying Doctor service and making emergency 400 km round trips through the outback with sick children), a mother (bringing up several children, not all her own), a travel agent, a social secretary, a host and an organiser (including of Kerry Packer’s New Year’s Eve parties).

This is a story about adventure, resilience, the unexpected journeys we need to go on to find ourselves, and having the courage to do something for yourself. In Sally’s words: ‘Life’s like that, fellas. You may spend a lifetime trying to find yourself but, at the end of the day, you’ve been there all along.’